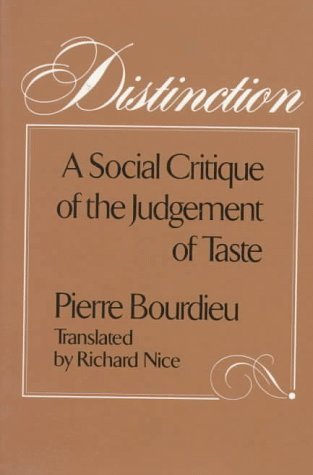 Pierre Bourdieu (1930–2002) was a French sociologist and public intellectual. Bourdieu’s contributions to the sociology of education, the theory of sociology, and the sociology of aesthetics have had a wide impact in several related academic fields (e.g. anthropology, media and cultural studies, education, popular culture, and the arts). In his academic career, he was associated primarily with the School of Advanced Studies in Social Sciences in Paris and the Collège de France.

Bourdieu’s work was primarily concerned with the dynamics of power in society, especially the diverse and subtle ways in which power is transferred and the maintenance of social order within and between generations. In deliberate opposition to the idealistic tradition of most Western philosophies, his works have often emphasized the corporeal nature of social life and emphasized the role of practice and embodiment in social dynamics. By resisting and criticizing the theories of Karl Marx, Sigmund Freud, Max Weber, Émile Durkheim, Claude Lévi-Strauss, Erwin Panofsky, and Marcel Mauss, among other things, his research initiated novel frameworks and research methods and introduced such influential concepts as cultural, social and symbolic forms of capital (as opposed to traditional economic forms of capital), cultural reproduction, habitus, field or location, and symbolic violence. Another significant influence on Bourdieu was Blaise Pascal, from whom Bourdieu entitled his Pascal Meditations.
Bourdieu was a prolific author, having written hundreds of articles and three dozen books, almost all of which are now available in English. His most famous book is Distinction: A Social Critique of the Judgment of Taste (1979), in which he argues that judgments of taste are related to social position, or more precisely, are themselves acts of social positioning. This argument is made by the original combination of social theory and data from quantitative research, photos, and interviews in order to reconcile difficulties such as understanding the topic within objective structures. In this process, Bourdieu tries to reconcile the influences of both external social structures and subjective experience on the individual. The book was later named by the International Sociological Association (ISA) “the sixth most important sociological work of the 20th century.”
Pierre Bourdieu’s work emphasized how social classes, especially the ruling and intellectual classes, retain their social privileges for generations, despite the myth that modern post-industrial society prides itself on equal opportunities and high social mobility achieved through formal education.

Bourdieu developed a theory of action around the concept of habitus, which has had a significant impact on the social sciences. This theory seeks to show that social actors develop strategies that are adapted to the social structures of the worlds they inhabit. These strategies are unconscious and operate at the level of bodily logic.

From Bourdieu’s perspective, any relatively autonomous area of ​​modern life (such as economics, politics, art, journalism, bureaucracy, science, or education) ultimately gives rise to a specific set of social relationships in which agents will engage in their daily practice. Thanks to this practice, they develop a certain disposition to social activities, which is determined by their position on the pitch. [iv] This disposition, combined with every other disposition that an individual develops through involvement in other fields operating in the social world, will over time become a disposition system, that is, a habitus: permanent, acquired patterns of perception, thinking, and acting.

Habitus is somewhat reminiscent of some pre-existing sociological concepts such as socialization, although it also differs from more classical concepts in several key respects. Above all, the central aspect of the habitus is its embodiment: the habitus not only, and even above all, functions at the level of overt, discursive awareness. Internal structures embody and function in a deeper, practical, and often pre-reflective way. An example is the “muscle memory” cultivated in many areas of physical education. Consider the way we catch the ball – complex geometric trajectories are not computed; it is not an intellectual process. While this is a skill that requires learning, it is more of a physical than mental process and must be done physically in order to learn. In this sense, the concept has something to do with Anthony Giddens’s concept of practical consciousness.

The concept of habitus was inspired by Marcel Mauss’s concept of body technique and hex, as well as Erwin Panofsky’s intuits concept. The very word habitus can be found in the works of Mauss, as well as in the works of Norbert Elias, Max Weber, Edmund Husserl, and Alfred Schutz, as modifications of this concept that appeared in the Aristotle notion of hexis. habitus through the Latin translation of Thomas Aquinas, but it was Pierre Bourdieu who made it the cornerstone of his sociology and used it to solve the sociological problem of agency and structure: habitus is shaped by structural position and generates action, therefore when people act and demonstrate agency, at the same time reflect and recreate the social structure. Bourdieu developed his theory of habitus by borrowing the ideas of cognitive and generative schemas from Noam Chomsky and Jean Piaget, and the dependence on history and human memory. For example, certain behavior or belief becomes part of the structure of society when the original purpose of that behavior or belief can no longer be recalled and becomes socialized by individuals of that culture.

Loïc Wacquant wrote that habitus is an old philosophical concept, derived from Aristotle’s thought, whose concept of hexis (“state”) was translated into habitus by medieval scholastics. Bourdieu first adapted the term in his 1967 post to Erwin Panofsky’s Gothic Architecture and Scholasticism. The term was previously used in sociology by Norbert Elias in The Civilization Process (1939) and in the description of Marcel Mauss’s “body techniques” (du corps techniques).
Mauss defined habitus as those aspects of culture that are anchored in the body or daily practices of individuals, groups, societies, and nations. It covers all learned habits, body skills, styles, and tastes

According to Bourdieu, habitus consists of:

systems of persistent, transferable dispositions, structured structures predisposed to function as structural structures, that is, rules that generate and organize practices and representations that can be objectively adapted to their results without assuming consciously pursuing a goal or clearly mastering the operations necessary to achieve them .