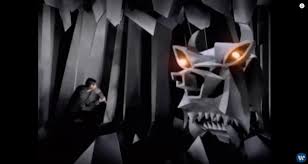 Posted at 16:24h in ARD 416 Media and Techniques by Beata Skorek 1 Comment

The song comes from the album “Californication” and was promoted by a dark music video inspired by the art of German expressionists. The video was directed by Jonathan Dayton and Valerie Faris in a black-and-white/monochrome Gothic style similar to Robert Wiene’s “The Cabinet of Dr Caligari”.

The music video for “Otherside,” a song by the Red Hot Chili Peppers, has an incredibly striking style and scenery. It is one of the best of their music videos because of the way it contributes fully to the meaning of the song. The meaning of the lyrics is precisely portrayed in the video without over-visualization.
The lyrics of the song are about the drug addiction of the lead singer Anthony Kiedis. Anthony had attempted to become sober many times, but he would always slide back into his drug-using habit

The main character of the story is a young boy who experiences an unusual and depressing dream showing the fight against addiction. The man is fighting with the shadow, the giant crow, the dragon and he has a lot of ladders to choose from. The scenography is in the convention of dark sleep. The clip is black and white with elements of individual colours, e.g. only red wings. The storyline in the video, the man’s nightmare, refers to Anthony’s life-long struggle to fight his drug addiction. For instance, the dragon and the crow he fights are the so-called “inner demons” he has to defeat to stay sober. He also has to fight his own shadow. The entangling, dark scenery gives the viewer an uncomfortable feeling. It portrays the horrors of drug obsession, and how lonely it makes the user feel.

The scenery of the music video is cubistic, inspired by the German expressionistic horror movie “The Cabinet of Dr Calagari,” and it also has Esher and Picasso elements. The video appears starkly two-dimensional because the scenery is made of hand-painted props in the style of German expressionistic paintings. The main colours in the video are black, white, grey and red, and portrays a story, with shots of the band members playing in between. In conclusion, the music video for “Otherside” portrays, quite accurately, the lyrical meaning of the words themselves. The dark and surreal scenery, mingled with the storyline, represent the horrors of Anthony’s addiction and just how very difficult it is for him to stay away from the drugs he has used for most of his life.