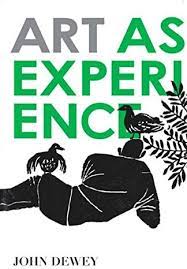 Dewey based his pedagogical system on instrumentalism, a direction of pragmatism initiated by Charles Peirce and disseminated by William James. It consisted of understanding experience as the essence of truth – what works as true is true. Experience is the source of gaining and verifying knowledge, hence the slogan of learning by doing was developed in his school of work. The school was modeled on a self-sufficient household, where children performed various crafts and household activities. The emphasis was on practical and manual activity. The main goal of the school was to stimulate the innate abilities of children, interests, enriching experiences, and independent work, while knowledge was gained somehow by the way. According to this
position aesthetic experience expresses the essence of the development of nature, the creative force flowing out
with special, rhythmic coordination of exchanges, interactions between the organism
and its surroundings.
According to Dewey, art, the essence of which is an aesthetic experience, expresses
the innermost principles of unfolding life and is the highest manifestation of nature. Dewey’s proposed position of empirical naturalism, though
it clearly changes the traditional meaning of metaphysics, does not marginalize it as a field
philosophy. On the contrary, it develops new issues and interesting perspectives for it.

Dewey’s metaphysics is classified as a philosophy of process, in accord
with which everything that is is a processual event18. However, it can also be described as a philosophy of chance. Dewey often described the world as contingent. It is not just that empirical laws are not necessarily
real, and events were not fully predictable, though he recognized it as well.
In general, in his description of the world, he did not begin by defining universally binding laws.
Dewey tried to avoid the vision that laws are true because they exist
in regularities, and the world is a composite of two types of things – regularities and events. For Dewey, there were only events and processes, many of which he portrayed as recurrent patterns of behavior. So it defined the world
as an impressive mixture where order and repeatability make it possible
relative predictability and control of indeterminate change processes. Dewey pointed out that only such conditions under which the elements
constants and variables, certain and risky, determinable and indeterminate occur
together, enable the emergence of sublime human creations, such as science or art. “Dewey tried to show that ideals, thinking, and art can
appear only in the indeterminate, random, deprived
absolute necessities of the world

Art as Experience (1934) is John Dewey’s main work on aesthetics. Dewey’s aesthetics have found application in many disciplines, including new media.
Dewey’s theory is an attempt to shift the understanding of what is essential and characteristic of an artistic process from its physical manifestations in an “expressive object” to a process as a whole, a process whose fundamental element is no longer a material “work of art”. but rather the development of “experience.” Experience is something that personally affects someone’s life. That is why these theories are so important in the social and educational life of people.

Such a change of emphasis does not mean, however, that the individual art object has lost its meaning; far from it, its primacy is explained: the object is recognized as the primary place of dialectical processes of experience, as a unifying opportunity for these experiences. Through an expressive object, the artist and the active observer come into contact with each other, with their material and mental environment, and with the entire culture.

The description of the actual act of experiencing is heavily drawn from the biological-psychological theories that Dewey made in his development of functional psychology. In an article on the psychology of the reflex arc, Dewey writes that sensory data and temporal stimuli penetrate into the individual through the channels of afferent sensory organs, and the perception of these stimuli is the summary. , is the basis of his aesthetic theory:

… experience is a product, you might say, a by-product of the continuous and cumulative interaction of the organic self with the world. There is no other foundation on which to build aesthetic theory and critique.

This quote is a dramatic extension of the boundaries of aesthetic philosophy, as it shows the relationship between art and everyday experience, and thus reminds people of the highest duties that art, society, and the individual have always owed to each other:

… works of art are the most intimate and energetic way of helping individuals share the art of living. Civilization is rude because people are divided into non-communicating sects, races, nations, classes, and cliques.
To emphasize what is aesthetic in an experience does not mean to emphasize what is apolitical, impractical, or otherwise marginal in the experience; instead, it is intended to emphasize how this experience, as aesthetic, is “the manifestation, recording, and celebration of the life of a civilization, a means of promoting its development,” and, insofar as this aesthetic experience relates to the types of experiences it has had in general, it is also “the final judgment of the quality of civilization.”

The idea behind “Art as Experience” was to describe how a work of art emerges from everyday life, ie the concept of how works of art sublimate the values ​​inherent in the experience. In his understanding, the work of art-recipient relationship is two-way, it is an interaction between equal parties. Experience is not something that occurs in contact with art, but it can be said that it co-creates it. the starting point of this process – the physical presence of an “expressive object” [Art as Experience, p 111] Art conceived as experience is the result of the interaction and mutual dependence between action and feeling. Proper experience is characterized by a balance between these parts. The predominance of either of them leads to distortions in experience “of little distorted meaning [ibid. P. 57]
Our life is constantly changing relations with the environment. It is quite a dynamic relationship. Order and stabilization are most often temporary situations. Dewey defines existence as a constant loss and regaining unity with the environment: “Desires and fulfillment, action and inaction form a pulsating rhythm of changes “[there]

it should be noted here that regaining unity is never a return to the situation from before the loss: “in the growth of life, however, such a return is never just a return to the previous state, because life was enriched by the state of inconsistency and adversity from which it emerged victoriously” [ibid., p. 18]
Analyzing man’s struggle with the environment, Dewey describes the attitude of artists here. Despite the fact that the artist strives to harmonize the experience, he does not avoid the tensions that are necessary for his striving to “regain unity with the environment” [page 20]. “The artist is inclined to nurture them, not for themselves, but because of their potential possibilities, bringing to a living consciousness a united and complete experience” [p.19]
The artist’s special sensitivity to the quality of things makes it possible to see the potential of art in the rhythm of life.

The painter, architect or cook orient their actions towards the perceiving recipient and vice versa, the aesthetic experience is “inseparable from the experience of execution” [p.62]
Perception is a creative process. Dewey translates perception as “a process consisting of a series of reactions that add up in the pursuit of objective fulfillment” [p66] which brings execution and experiencing closer. To be complete, sensual contentment must to some extent follow the intention of the creator, because “it does not appear in isolation, but connects with sharing that follows” [p.62]. This principle is also valid in the relations between the cook and the eater. Dewey sees it very clearly: “Even the pleasures of the palate are of a different quality to the gourmet than to someone who just tastes what they eat. It is not just the difference in the intensity of feeling. The gourmet is aware of many other sensations besides the taste of the dish. it is believed that the directly experienced taste includes qualities that depend on its recognition, its origin and the manner in which it was obtained in relation to the criteria of taste excellence “[p. 69] in this quote it is clear that, in order to be complete, the experience requires, firstly, following the intention of the creator, and, secondly, that the ability and pleasure to join the creator’s world must be preceded by some effort and learning, which is necessary to complete purely sensual experiences and explore (in this case) the perfection of taste.