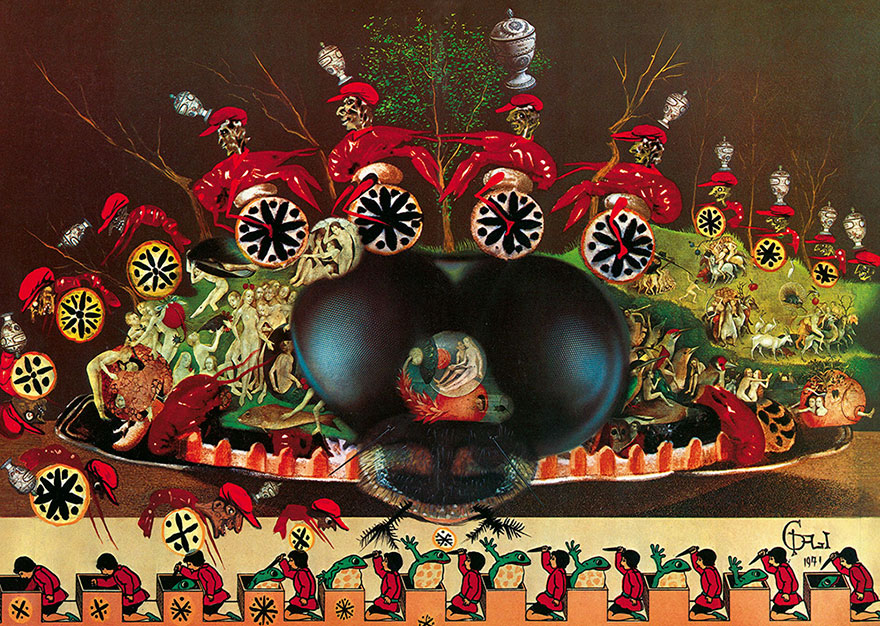 Salvador Dali claimed that as a child he dreamed of becoming a chef. As we know, those dreams did not come true. However, a certain attraction to cooking remained with him throughout his life. Together with his wife Gala Dali, he gave famous parties that had both a gastronomic and theatrical dimension. Invited guests dressed up in completely fantastic costumes, and wild animals roamed among surrealist tables (Dali especially loved black panthers). Although the ingredients and preparation methods of the dishes served during these events seemed extravagant, they were previously tested by famous chefs in the best Parisian restaurants, such as La Tour d’Argent, Maxim’s, or Le Train Bleu.

Dali used to say: “The anchovies I chew have something of the fire with which I burn. Genius resides in my body. This forces me to pay close attention to the delights of the table …. Everything begins in the mouth and through the nerves looking for a way to the body. He claimed that “cooking is close to the painting. When you add a little of this and that, it’s like mixing paints.” When writing about painting, he often used associations related to food. It was while he ate that the ideas for the pictures popped into his head. His famous clocks were born while eating camembert cheese. He claimed: “everything that is edible enchants me”, he used to say that for those he loved, “he could turn into a cannibal and eat as a proof of love”. That is why he used the phrase “I eat Gala”, his beloved wife, so often.

Her extraordinary beauty was immortalized in the painting “Portrait of Gala with Two Mutton Chops Balanced on Her Shoulder”. He also liked when his art was treated as “edible”.
He wanted it to be “digestible”, because although his life was full of quirks, everything he created had a meaning and purpose. He often transformed himself for the needs of his image, but inside, I think he was completely different from what he showed to the world. When he was alone in a restaurant, he behaved like a normal person, but in the company of his guests, he created a whole spectacle. A surreal spectacle! From time to time, he organized great parties, where he meticulously arranged the menu, created dishes with surprising taste and visual combinations, and selected the scenery. He could not be forgotten when he brought a small elephant to a restaurant and asked the waiter to take him for a walk, and when asked to give a lecture at the Sorbonne, he drove up in front of the Parisian university in a white Rolls-Royce filled with dozens of cauliflowers.

Alice Cooper met the painter in 1973 when he was offered to play a private concert, noting that the artist would like to meet him (along with
with the team). On the spot, it turned out that the surrealist had a vision of a hologram (using Alice Cooper, sitting on a throne with a diamond crown on his head, his mouth ready to utter his voice). He then showed a bewildered Cooper the “brain” – an eclair with ants that formed “Alice and Dali”.