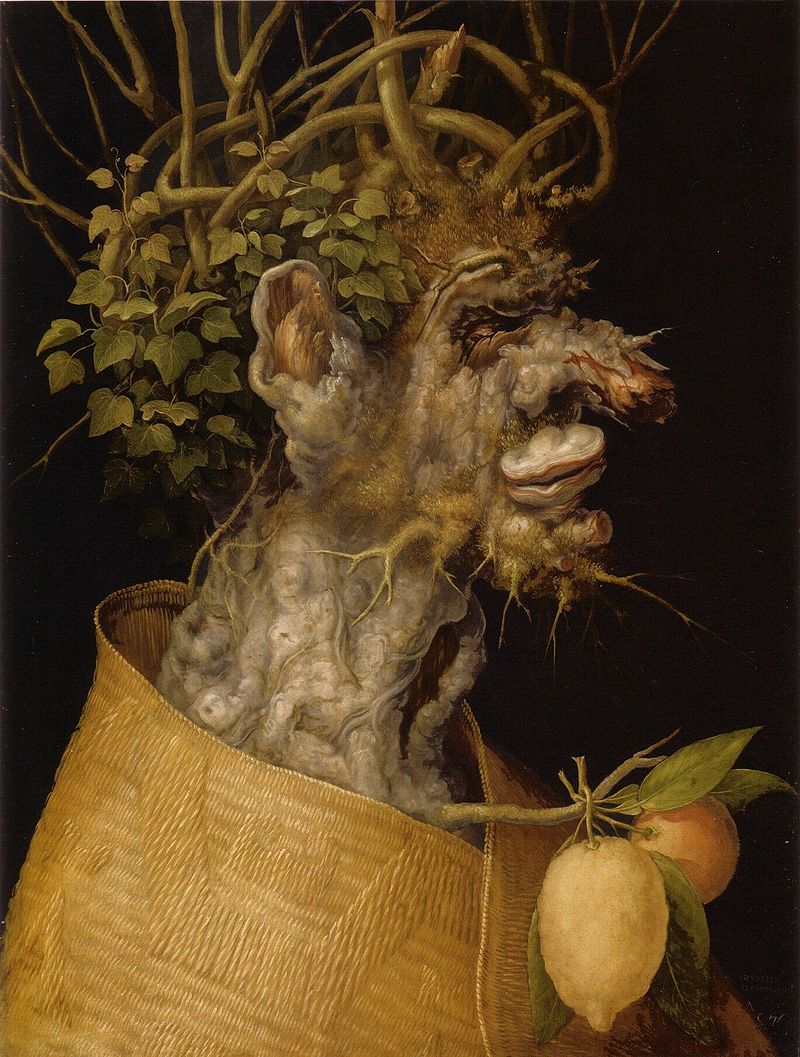 Giuseppe Arcimboldo (1526 or 1527 – 7/11/1593) was an Italian painter best known for creating ingenious portrait heads made entirely of objects such as fruits, vegetables, flowers, fish, and books.

These works constitute a separate category from his other productions. He was a conventional court portrait painter for the three Roman emperors in Vienna and Prague, creating also religious themes and, inter alia, a series of color drawings of exotic animals in the imperial menagerie. He specialized in grotesque, symbolic compositions of fruits, animals, landscapes, and various inanimate objects arranged in human forms.

The dead portraits were clearly intended in part as whimsical tidbits to amuse the court, but critics speculated how seriously they got involved in Renaissance Neoplatonism or other intellectual currents of the time.
He is known as the 16th century Mannerist. During the transitional period from 1520 to 1590, Mannerism took over some artistic elements from the Renaissance period and influenced other elements of the Baroque period. Mannerism tended to show a close relationship between man and nature. [9] Arcimboldo also tried to show his appreciation for nature through his portraits. In Spring, the human portrait consisted only of various spring flowers and plants. From the hat to the neck, every part of the portrait, even the mouth, and nose, consisted of flowers, and the body of plants. In winter, on the other hand, man consisted mainly of tree roots. Some leaves from evergreen trees and branches of other trees became hair, and a straw mat became the costume of a human portrait.

The main object of interpretation of contemporary art critics is “interesting” paintings by Arcimboldo, whose works, according to V. Krigeskort, “are absolutely unique”. Attempts at interpretation begin with assessments of the artist’s cultural background and philosophy, but no consensus is developed in this regard. B. Geyger, who raised these questions for the first time, relied mainly on the judgments of contemporaries – Lomazz, Comanini, and Moringa, using the terms “scherzi, grilli and capricci” (respectively “jokes”, “whims”, “caprices”). Geyger’s monograph is entitled “Comic Pictures by Giuseppe Arcimboldo”. Geyger regarded the artist’s works as an inversion when ugliness seems beautiful, or, on the contrary, as a disgrace beyond beauty, entertaining the royal client. A similar point of view was presented by Barthes, but he reduced the artist’s works to the theory of language, believing that the foundations of the philosophy of Arcimboldo’s art were linguistic, as he confused them by mixing and combining elements, which then played a role in linguistic innovations, by not creating new signs.

Arcimboldo speaks a dual language that is both obvious and obscure; creates “mumble” and “gibberish”, but these inventions remain quite rational. Generally, the only whim (weirdness) that Arcimboldo does not allow – he does not create an absolutely obscure language … his art is not crazy.

Arcimboldo’s classification as a mannerist also belongs to the 20th century. Its justification is contained in Gustav Rehn Hok’s work The World as a Maze, published in 1957. Arcimboldo was born in the late Renaissance and his first works were made in the traditional Renaissance style. According to Hok, during the Renaissance, an artist had to be, above all, a talented craftsman, skilfully imitating nature, because the idea of ​​fine art was based on studying it. Mannerism differed from Renaissance art in its attraction to “non-naturalistic abstraction.” It was a continuation of the artistic innovation of the late Middle Ages – an art embodying ideas. According to G. Hok, there is a concetto in consciousness – a concept of an image or an image of a concept, an intellectual prototype. Arcimboldo, starting with confetti, painted metaphorical and fantastic pictures, extremely typical of mannerist art. In On Ugliness, which was published by Umberto Eco, Arcimboldo also admitted belonging to the Mannerist tradition for which “… preferring to pursue strangeness, extravagance, and shapelessness over-expressive finesse” is special.

In the work of Arcimboldo and Archimboldesk, F. Legrand and F. Xu tried to reconstruct the artist’s philosophical views. They concluded that the views represented a kind of Platonic pantheism. The key to reconstructing Arcimboldo’s worldview seemed to them to be the symbolism of the court ceremonies staged by the artist and allegorical cycles. According to Plato’s dialogues “Timeus”, the eternal God created the universe out of chaos by combining the four elements – fire, water, air, and earth, which define the all-encompassing unity. The works of T. DaCosta Kauffman consistently carry out a serious interpretation of the heritage of Arcimboldo in the context of the culture of the 16th century. Kauffman was generally skeptical about attributing Arcimboldo’s works and considered as undoubtedly the originals only four paintings, those with the artist’s signature. He based his interpretation on the text of the unpublished poem by J. Fonteo “The Image of the Seasons and the Four Elements of the Imperial Artist Giuseppe Arcimboldo”. According to Fonteo, the allegorical Arcimboldo cycles convey ideas of the emperor’s greatness. The harmony in which fruit and animals combine to form images of a human head symbolizes the harmony of the empire under the good administration of the Habsburgs. The images of the seasons and the elements are always presented in profile, but in this way, Winter and Water, Spring and Air, Summer and Fire, Autumn and Earth all face each other. In each cycle, symmetry is also observed: two heads look to the right and two – to the left. The seasons are intertwined in an unchanging order, symbolizing both the constancy of nature and the eternity of the Habsburg boards. This is also indicated by political symbolism: in the image of Air there are symbols of the Habsburgs – a peacock and an eagle, and Fire is decorated with a chain of the Golden Fleece Award, whose grandmaster by tradition was the head of the reigning dynasty. However, it is made of flint and forged steel. The guns also indicate an aggressive start. Habsburg symbolism is present in the painting The Earth, where the lion’s skin stands for the heraldic sign of the Czech Republic. The pearls and corals similar to the deer in Water point

In the 20th century, Arcimboldo’s work underwent a revival thanks to the interest of surrealists such as Salvador Dalí, for whom Arcimboldo’s complex paintings and allegorical allusions were extremely attractive. However, it was the inclusion of his works by the director of the Museum of Modern Art, Alfred Barr, in the Fantastic Art, Dada, Surrealism exhibition of the 1930s that contributed most to bringing Arcimboldo back to new attention from the art world. Since then, art historians have re-evaluated the very individual style of Arcimboldo, elevating it to the rank of one of the greatest mannerists of the 16th century. The 1987 exhibition “The Arcimboldo Effect: Transformations of the face from the 16th to the 20th Century” at Palazzo Grassi in Venice aroused interest in his works from psychologists and scientists dealing with optical illusions, multiple images and facial recognition. In 2009, American artist and filmmaker Philip Haas created four large-scale fiberglass sculptures as a three-dimensional tribute to the Arcimboldo series of four seasons. Haas stated: “Playing with the imagination of Arcimboldo and its reinterpretation allowed me to modernize the Renaissance and root contemporary art in the history of art.”