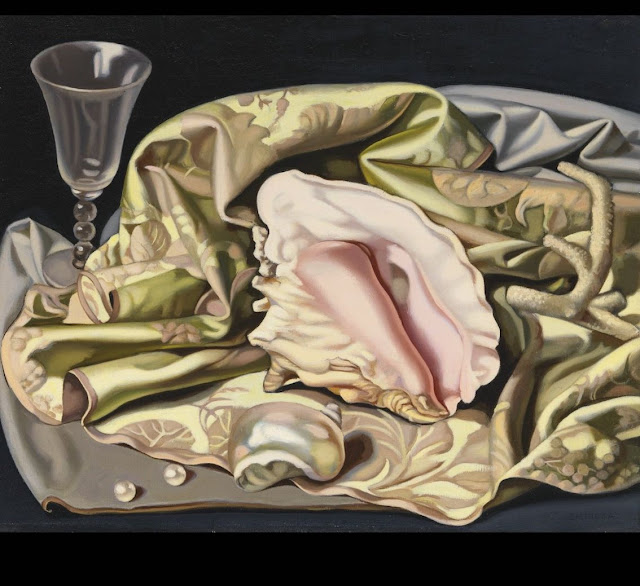 Tamara Łempicka (May 16, 1898 – March 18, 1980), better known as Tamara de Lempicka, was a Polish painter who spent her professional life in France and the United States. She is best known for her polished Art Deco. In 1911 Tamara moved to her relatives Stefa and Maurice Stifera to St. Petersburg. She studied drawing at the Academy of Fine Arts, and in the evenings she took an active part in social and cultural life. The Stifers took her to ballet performances at the Mariinsky Theater and to the private theater of the Yusupov princes, to elite recitals and concerts in Tsarskoye Selo, the summer residence of the Romanes. During one of the St. Petersburg balls, the elite met her husband, Tadeusz Łempicki, their young lawyer and bon vivant. His family, a native of Warsaw, lived in St. Petersburg in the “German palace” of the Greater Poland prince Włodzimierz Aleksandrowicz. Mother, Maria Norwid, was the niece of Cyprian Kamil Norwid. Tamara married Łempicki in 1916 in Saint Petersburg. In the same year, their Blood, Maria Krystyna, called Kizette, was born. During the revolution in 1917, Tadeusz Łempicki was arrested. After his release from the prison in which they met in Denmark, from where they left at the end of 1918 for Paris, Tamara Łempicka began studies at the Academie Ranson in Paris, with Maurice Denis. He was a demanding and methodical teacher, under whose supervision the young artists perfectly mastered the basics of composing a picture and explored the secrets of the painting workshop. His views on art and his painting practice were also important, as evidenced above all by his attachment to the aesthetic and decorative value of art. However, the most important for Łempicka turned out to be the tips of another teacher, Andre Lhote, a painter, decorator, art critic, and theorist. He was a promoter of modernizing the canon of salon painting by using the formulas of experimental painting, from impressionistic color solutions to cubist methods of constructing space in a painting. Lhote’s work had nothing to do with the avant-garde searches in contemporary painting, which in Impressionism, and especially in Cubism, questioned the system of imaging rooted in the tradition of the Renaissance. Its aim was to work out a compromise, polished form, which was to flatter the conservative tastes of the wealthy bourgeoisie, and at the same time give the recipient of art the feeling that the paintings they acquire follow “the spirit of the times”.

In Lhote’s studio, Łempicka learned, above all, how to efficiently combine modern methods of imaging with the great academic tradition, classic forms of art by Poussin, David, and Ingres. Her works are characterized by post-Cubist stylization, in which the forms are made of simplified solids, but composed within the classical order. Łempicka was constantly deepening her interest in the artistic tradition. Fascinated by the art of the Renaissance, she traveled to Italy to study the works of the old masters. Influenced by this painting lesson, she used luminous, pure, and vivid colors, finishing every detail of the painting with extraordinary precision. Her works were decorated with stylized, often even manneristic, forms and figures. This combination of tradition and modernism, which was attractive to the audience at the time, and the aforementioned decorativeness made the painter extremely popular. In the mid-1920s, with the heyday of art deco aesthetics, Łempicka’s career began to develop rapidly. She exhibited at salons in Paris and abroad, including Poland. The aesthetics developed by Łempicka corresponded to the tastes of the wealthy bourgeois, as did the subject matter of the artist. She painted mainly portraits and still lifes, and above all, nudes that were to decorate the salons of wealthy townspeople. Aristocrats and wives of wealthy industrialists ordered portraits from her en masse, usually of full size. The number of these orders resulted in almost mass production of paintings, during this period Łempicka sometimes painted several hours a day. On the other hand, art critics were often reluctant to see her works, and their opinions mixed with various categories, ranging from aesthetic to ethical, when they condemned the painter for “corporeality bordering on kitsch or at least sin”. They called her “a propagator of perverse painting”, pointing to the overtly homoerotic nature of her nudes. Of course, this aspect of her painting made her popular and interested in a wide audience.

The undoubted value of Łempicka’s work was the ability to transfer the observations of the surrounding world to the language of painting she developed. Her portraits make up a gallery of contemporary types, heroes of the artist’s everyday life, and thus belonging to the social and cultural elite. What is individual is combined with the typical, and the artistic form perfectly corresponds to the subject matter. In Łempicka’s paintings, the atmosphere of the crazy 1920s is evocatively conveyed. And so, for example, her Self-Portrait at the Wheel from 1929 can be considered a symbolic image of an emancipated woman of that time.

In 1934, Łempicka remarried, Baron Raoul Kuffner, the owner of the largest land property in Austria-Hungary. In the winter of 1938, she and her husband decided to leave the Old Continent. They were probably concerned about the rising tide of fascism in Europe. Due to Kuffner’s origins, they liquidated their property and left for the United States. In the 1940s, Łempicka became the favorite portraitist of Hollywood stars, social and financial elites, where she was also famous for her lush and decadent social life. Soon, however, in the face of radical changes in post-war art, which turned rather towards the tradition of surrealism and abstraction, the painter’s popularity faded away. Despite dramatic attempts to change her style, imitate surreal landscapes or expressive, textural abstractions, her career fell. After her husband’s death in 1962, Tamara de Lempicka abandoned painting and moved to Mexico, where she died in 1980.