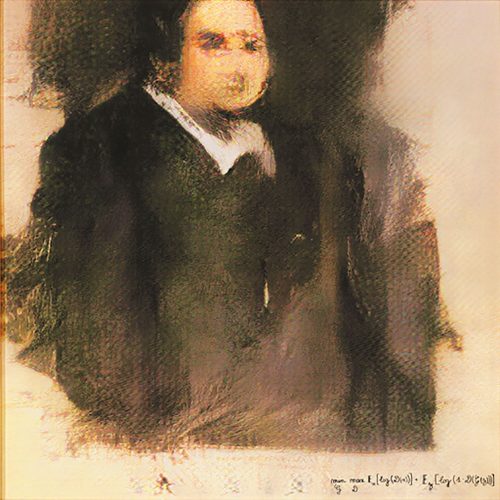 The first artificial intelligence is mentioned in the Bible. Golem (Hebrew … גולם goylem) – a creature made of clay in the shape of a man, but without a soul that understands neshama, and therefore also the ability to speak. The Hebrew word golem appears only once in the Bible, in Psalms 139: 16, a verse the Talmudic tradition places on Adam’s mouth..

The subject of creating artificial life fascinated many artists. Mary Shelley created perhaps the most famous such character in her novel “Frankenstein; or, The Modern Prometheus”

In October 2018, an AI work was put up for auction for the first time. A blurry image that would otherwise have been unfinished had walked under the hammer at Christie’s auction house. The value of the image of the non-existent Edmond de Belama, generated by the machine, was estimated at $ 7,000. It sold for $ 432,500.

Gauthier Vernier, one of the three co-founders of the Obvious art collective, in which the portrait was made, laughed when asked if similar artists intended to kick artists out of business. The co-authors of Belamy’s portrait are not professional artists. They are students of management and technology.

“There is enough space for all of us,” he told the British newspaper The Telegraph. – We see it as a new branch of art, just as photography was in the 19th century. We are a new generation of creators, but we certainly won’t replace other artists.

Three colleagues used 15,000 portraits created between the 14th and 20th centuries as a medium for the computer to paint the picture. Previously, they had sold eleven other works, which attracted the interest of the famous French patron of art, Nicolas Laugero Lasserre, a professor known for collecting works including Invader and Banksy. In February 2018, he bought his first painting from Obvious for 10,000 euros. He gave the students a clear signal that their idea and the work of the machine had value.

Harold Cohen, a British expressionist with Polish roots, was the first artist to use autonomous computer drawings in his art.

In 1971, he was invited to the Laboratory of Artificial Intelligence at Stanford University. He spent two years there. He wrote the AARON program and prepared abstract works. They were received with caution at first. However, from year to year, they enjoyed increasing media attention.

Cohen was recognized by Raymond Kurzweil, the famous inventor and visionary, who presented the painter, among others, Stevie Wonder in his 1987 short film “The era of intelligent machines”.

In 1996, Discovery OnLine showed the painting AARON at work on a live webcast from his studio. A wave of interest in new art has started. AARON and its creator have been the subject of many TV shows, including “Beyond 2000”, “Scientific American Frontiers” and the Open University Series BBC. Several of Cohen’s works are currently on display at the London Tate Gallery.

Another important moment came in 2015, when Google launched Deep Dream Generator based on deep neural networks (also available as a DreamDeeply application for mobile devices).

The program views millions of images, lines of text, musical notations and creates psychedelic works. It was invented to help scientists and engineers see what a deep neural network sees when it analyzes a given image.

The algorithm has been dubbed “inception” after the 2010 film about theft of dreams. Only later did it become a new form of abstract art, defined as Inceptionism.

Scientists from Google taught the system on the example of images of animals, so the computer searched for them even where they were not. Visualizations are the result of system mishaps.

It is a Google mobile application that was created as part of the Google Cultural Institute project. Works with over 1.2 thousand. museums, galleries and institutions from 70 countries, makes their collections available online. With it, you can virtually visit a museum, monument, see a selected image up close in impressive resolution (so far it is the only online repository where you can see the invoice of the work up close).

The program allows you to view collections of cultural and art treasures from over 850 museums and archives from around the world.
Thanks to the application, it is also possible to compare the selfie with works of art scanned by Google. The program finds in its resources portraits by great artists similar to the photo of our face and calculates the percentage of coincidence with our “self-portrait”.
The application has already been installed by over 5 million users.