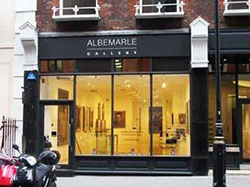 An understanding of European history and culture will best be gained by visiting the top art galleries in the United Kingdom.

From becoming the European leaders in portraiture, landscape art, decorative art, and fine art in the 18th century, the United Kingdom has become one of the key centers for Contemporary art.

You can find and admire their works as well as of other brilliant artists from the United Kingdom in the galleries included in our list.

Founded more than 20 years ago by Tony Pontone, the Albemarle Gallery has established itself as one of the leading proponents of Contemporary and Figurative art.

Pontone, who serves as the gallery’s Creative Director, continues to find and showcase the works of past and upcoming talent in the world of fine art.

The gallery plans to continue its course of presenting the masterpieces of award winning artists. In its current roster are highly-acclaimed and multi-awarded artists such as Miriam Escofet, Caroline Burraway, Neil Douglas, and Bae Joonsung.

Annely Juda is a German-born art dealer who founded the Annely Juda Fine Art Gallery in 1960.

Juda has directed the focus of her gallery toward the exhibition of the most definitive representations of art styles such as Old Masters of the 20th century, Avant-Garde, and Russian Constructivism.

The gallery has produced a number of landmark exhibitions over the last decade including The Non-Objective World (1970), From Figuration to Abstraction (1986), 1945: The End of the War (1995), The Thirties: Influences on Abstract Art in Britain (1998), American Beauty (2002), and The Great Experiment: Russian Art: Homage to Camilla Gray (2009).

From a Director of Sotheby’s in 1968 to opening his namesake gallery in 1996, Derek Johns has continued to pursue his passion for propagating the greatest masterpieces of Old Master paintings covering the 13th century to the 18th century.

The focus of the Derek Johns Gallery is to highlight works of artists from Spanish, Italian, and French traditions. Johns has not limited the fine works of art to his primary expertise.

His gallery also showcases paintings from the 19th and 20th century as well as the Viceregal and South American masterpieces.

While Derek Johns continues to steer the creative direction of the gallery, he is assisted by Ellida Minelli, who joined the company in 2011.

Lisson Gallery is one of the oldest and most influential fine art galleries in the United Kingdom. It was founded by Nicholas Logsdail in 1967.

Logsdail was instrumental in putting the paintings of Minimal and Conceptual artists at the forefront of English fine art.

As the gallery entered the new millennium, it expanded its roster of talent to include international artists such as Marina Abramovic, Ai Weiwei, John Akomfah, Susan Hiller, and Tatsuo Miyajima.

Lisson Gallery has presented its collection at the most definitive exhibitions including Art Basel in Hong Kong, Frieze Los Angeles, the Dallas Art Fair, and events held in New York and Milan.

Frank Lloyd and Harry Fischer escaped the horrors of World War 2 in Austria to open the Marlborough Fine Art Gallery in the United Kingdom in 1946.

Lloyd had come from 3 generations of art dealers while Fischer’s expertise lay in antiquarian books. A chance encounter as soldiers in the Pioneer Corps of the British Army led to a mutual discovery of fine art.

While the gallery initially focused on Modern German Art, it eventually shifted its direction toward 20th century art from the masters of Germany and Austria.

Through a series of landmark exhibition beginning 1959, the gallery successfully introduced an appreciation for the works of the old master to the United Kingdom.

These exhibitions included Art in Revolt, Germany 1905-1925, Kandinsky, the Road to Abstraction, The Painters of the Bauhaus, plus events that showcased the works of Die Brucke and Kurt Schwitters.

The Marlborough Fine Art Gallery has collaborated with several distinguished museums and galleries to host retrospectives.

Among these collaborations involved the Tate Gallery in New York and London, the Jewish Museum in Berlin, the Kuntsmuseum in Bonn, and the British Museum.

Of course, this is only a fraction of the percentage of significant galleries in the UK.