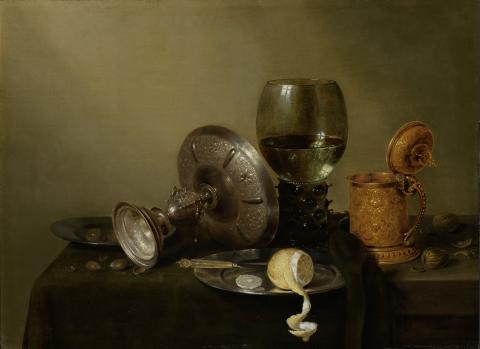 Dutch artists usually had a specific specialization. Sometimes they limited the scope of the topics they undertook to a very narrow field. Those who specialized in still lifes often narrowed the field of their artistic search even more – they painted flower still lifes or excelled in still lifes, the so-called breakfast (banketje). The term banketje is defined as compositions whose theme is food. These are representations of tables set, broken and left food and dishes. Willem Claesz Heda was the master of this type of paintings.

The still life with the golden cup, painted in 1635 and kept in the collections of the Rijksmuseum in Amsterdam, is an excellent example of this genre and one of Heda’s most outstanding works. The picture was created at a time when the artist painted similar compositions with particular devotion, he was, one could say, at the peak of his abilities. The last works known to us, painted by him, come from years. 60. XVII century. Imagine a table covered with a white satin tablecloth. The tablecloth does not cover the whole of the long table, about two-thirds, the rest of the batch is exposed, and the tablecloth is rolled up, draped over the table. Heda has mastered the use of chiaroscuro. He marked the smallest refractions of light on the fabric, the smallest creases forming the shaded area, additionally, he used paint and brush to suggest the slipperiness, smoothness and muslinness of satin. This sensitivity to the texture and properties of the material – its delicacy, warmth, gait, hardness and softness – is evident with every element of a still life painted by the artist. On the right side of the composition there is a metal, probably a tin, silver-graphite jug with a bulky belly and an open lid. To the left of it there is a golden goblet, intricately decorated with openwork, covered with a lid with a figure of the Greek goddess Athena. Next to it, a chalice made of dark green glass, with a bowl mounted on a massive, cylindrical leg decorated with numerous insets. Right next to it, a silver or tin, quite tall, cylindrical vessel with salt on top, and right behind it a fancy glass jug with a slender, S-shaped spout. In the foreground, in front of the dishes, there is a lemon, the upper part of which has been cut, the peel is partially removed, slightly twisted, hanging freely from the fruit. In front of the golden cup there is an overturned silver fruit plate. Right next to it is a tin plate with a half-rolled bread roll, a bit deeper a plate with oysters, and on the edge of the table, on the left side, a plate on which there is a piece of paper rolled into a cone (the side from the old almanac), from which pepper is spilling out.

The painting is kept in a unified tonal palette of golden browns and olive gray, characteristic of the Harlem environment. The way the individual elements of the still life are arranged is characterized by peace, order and order despite the signs of chaos – a rolled-up tablecloth, an eaten bun or an overturned plate. The composition is characterized by refined simplicity and detached elegance. Heda is extremely precise in presenting details, has an amazing sense of observation of reality – shape, texture, material – and the ability to translate these observations into the language of painting. His mastery is especially noticeable in the way he works with chiaroscuro. Understanding the structure of the material, it reflects light on glass differently, on metal, or on satin. Light slides along individual elements of the still life, seems to be absorbed by matter, it brings out intricate ornaments adorning the vessels. Heda works in a manner of far-reaching, even unreal, realism.

By analyzing the symbolic layer of the objects painted by Heda, the researchers concluded that Still Life with the Golden Cup refers to the sacrament of marriage and, through the language of meanings, speaks of the values associated with marriage. Particular attention was paid to the figure of the Greek goddess Athena decorating the cover of the golden cup. Athena was considered a symbol of wisdom and purity. Salt was also related to purity. Pepper was equated with generosity and honesty. Oysters, in turn, were a symbol of the unity of man and woman, a symbol of physical love. Lemon, being a luxury commodity, as a sour and tart fruit, did not encourage greedy eating, so it was perceived as a symbol of virtue and moderation. The half-peeled fruit with the peel off was supposed to suggest that the rejection of material values and focus on spiritual development is a great value.

The traditional, moralizing reading of Still Life with a Golden Goblet, combined with the modest, muted colors of the painting, make the canvas a manifestation of modesty and restraint. Meanwhile, it is worth noting that all the items presented by Heda are luxurious items, available to the wealthy part of the society: silver and tin utensils, Rhenish wine, which can be expected in the jug, pepper imported from overseas countries, salt, lemon. Building a composition of such goods, mostly imported to the Netherlands, Heda in fact painted the map of the Dutch trade activities: wine was imported from Germany, France or Spain, lemons from the Mediterranean countries, grain from the Baltic countries, salt from the Caribbean, silver was imported from Peru , pepper from the west coast of India and from Indonesia. The spice trade, not only in pepper, but also in cloves, nutmeg and cinnamon, was the driving force behind the entire deep-sea trade of the Netherlands, and brought great fortunes to merchants and investors

It is worth recalling that the formation of the still life as an independent painting genre in the first half of the 17th century coincides with the fact that the Netherlands gained a dominant position in overseas trade. A particularly important role in the development of trade between the Netherlands and non-European countries was played by the Dutch East India Company (an association of merchants enjoying the privilege of Far East trade) established in 1602. From the very beginning, the company actively and expansively joined the trade, quickly taking back the primacy of Spain and Portugal. The port cities of the Netherlands have also become the cradle of internal European trade. In Amsterdam, auctions were held at which traders from various parts of Europe obtained luxury goods from overseas. Anyway, goods imported from China, Japan and the coasts of India constituted an object that was grateful to portray. White and blue, thin and almost transparent porcelain imported from China, glossy black lacquer with gilding imported from Japan or other types of Asian decorative objects gave painters the opportunity to show off their artistry, arrange delicious, sumptuous compositions enriched with seafood, but also typically Dutch products : herring, cheese or clay pipes.

It was often pointed out that wild still lifes, in which painters accumulated very expensive things in one space, were to constitute a Calvinist criticism of excessive consumption, lavishness and succumbing to the temptations of the world. This generally accepted interpretation, however, forced researchers to ask the question of why so much effort was put into the most faithful and careful presentation of objects, since the meanings associated with them, certainly inscribed in the worldview of the general public, were in fact to be condemned? Paying attention to the objects themselves, including their origin, and not only to their symbolism read, among others, thanks to moralizing treatises or other texts from the era, allowed to link still lifes with trade, which was the basis of the functioning of Dutch society. Thus, numerous compositions created in the 17th-century Netherlands depict the universe of things, including Still Life with the Willem Claesz Gold Cup. Hedy can be interpreted as praising the trade. The Far East trade, thanks to which the oriental trade became one of the elements of Dutch everyday life, but also of domestic trade and native production – the production of herring, about which even poems were written, or clay pipes, which became the specialty of Gouda producers. Still lifes, which are still awe-inspiring today, carry two seemingly contradictory messages: on the one hand, they are praise and, on the other, a warning against prosperity

Simon Schama, The Embarrassment of Riches. The Interpretation of Dutch Culture in the Golden Age, Berkeley and Los Angeles 1988.

Simon Schama, Perishable commodities: Dutch still-life painting and the “empire of things”, in: Consumption and the world of goods, edited by John Brewer, Roy Porter, London and New York 1993, pp. 478–488.

Julie Berger Hochstrasser, The Conquest of Spice and the Dutch Colonial Imaginary. Seen and Unseen in the Visual Culture of Trade, in: Colonial Botany. Science, Commerce, and politics in the Early Modern World, ed. Londa Schiebinger, Claudia Swan, Philadelphia 2005, chapter 10″