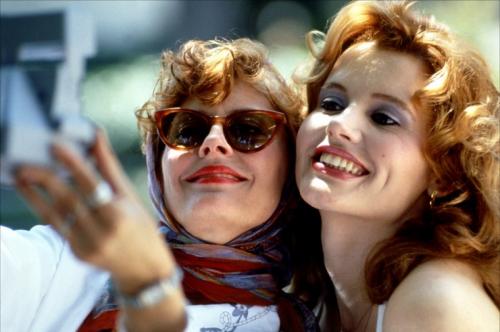 Thelma and Louise are one of the loudspeakers of Ridley Scott’s 1991 films. Susan Sarandon and Geena Davis created brilliant creations in it.Thelma and Louise is a story about women, true friendship, freedom and the price we pay.

Thelma and Louise is a film set in the atmosphere of a road movie, which breaks with the tradition of the genre so far by casting as female escaping heroes. The title heroines are frustrated and bored everyday friends planning to break away from routine obligations. To this end, they set off on a journey, which initially is to be a weekend stay in the mountains.

Unfortunately, a nice trip of friends is interrupted by a traumatic event – Louise forced to murder the would-be rapist Thelma. From now on, the heroines are on their own. Make decisions to escape, available due to the lack of witnesses of sudden attempts by Thelma and a large number of people used in clubs who saw her having fun and bold dances. Head towards Mexico, which is a characteristic place of escape for those wanted in this type of film, identified with the form of asylum.

Although the viewer is sympathetic to both women, it is difficult not to notice that they are making bad decisions on their way. The price of freedom turns out to be a complete embezzlement of law, which cannot lead to a positive finale. The first crime they committed – the killing of a bar man attacking Thelma – is justified by his rape attempt and results from self-defense. Everything that follows, however, is the result of subsequent not-well-thought-out decisions. On the one hand, we are happy to see women find in themselves unknown strength; on the other hand, we feel that they are doomed to failure

The tale of friendship told in “Thelmie and Louise” goes beyond the stereotypical framework imposed by Hollywood. The bond connecting both women turns out to be stronger than any other relationship connecting them with people. Torn out of the cramped spaces of the house, depicted in open landscapes straight from the west, women seem to be truly free – not so much because of their independence from men, but because of their friendship.

Thelma and Louise is a work infinitely filled with freedom and the desire to achieve its fullness. The title heroines spontaneously express their rebellion, abandoning all obligations, they set off on the road.

Characteristics of the work of Ridley Scott are present on the screen of strong women, which culminates in the picture of Thelma and Louise – this film is completely dependent on the range of the female sex. The change in the classic pattern of road cinema is that the heroes (and not like the heroes) are embraced with unbound killings and searches in the film, which allows you to escape, and at the same time move to brutal acts.

These women in their actions aimed at male representatives seem to avenge for all the wrongs done not only to them, but also to most women – this is clearly seen in the scenes with a stereotypical truck driver who does not spare sexist comments on them. Eventually, the man gets a decent lesson (and a lesson in the future about how to treat women) from finalized girls who compromise him and cause his truck to explode.

Thelma and Louise also tackles the extremely difficult topic of the so-called rape cultures. It manifests itself in the unpleasant experience of Louise and the would-be rape on Thelmie, which is the ignition engine of further events. In the opinion of the guests of the bar in which the heroines were entertaining, Thelma “was guilty of herself” – she danced too boldly, spent the whole evening in the company of a man interested in her, and her clothes were too defiant.

In such situations, there is a paradox that the woman is blamed for rape, because she allegedly provoked the attacker, while nothing justifies the pathological act of the perpetrator. We live in a time when raped women sometimes become double victims – as victims of sexual assault and of guilty crime, imposed by social conventions, about what women can wear and what should not and how they should behave in contact with men not to encourage them to intercourse. Thelma did not want an intimate relationship – her absurd fault was good fun and attractive appearance.

Ridley Scott’s movie is a big piece of good cinema, which keeps you in suspense and for a moment is not yet a long scene of the pursuit of the heroines. Thelma and Louise is an extremely refined and groundbreaking work, containing a veritable manifesto of feminism. Scott creates strong women who face unequal challenges in the unequal fight, defending